Troubleshooting washing machine problems is not too tedious. When your machine won’t spin, there could be a few possible reasons why this is happening, but all you have to do is to search and know the right cause of it and correct it.

The drum stiff and won’t spin.

A drum that is stiff and won’t spin is one of the most common problem washing machines normally have, and in most cases, you’ll be able to solve this problem without spending much money or any on a plumber or repairer. Once the fault is identified, everything could be easy ranging from the repair and expenses to be made.

What could cause the washing machine drum not to spin?

Though, you will find it difficult because it has something causing resistance to it, but if the belt has broken off, the drum will rotate freely. If this is observed, open the up the access panel of the washing machine, while the machine has been disconnected and unplugged from Power supply, you can then replace the belt with a new one. This is a very simple and easy job you can do yourself.

The problem could be around the pump in the washing machine. If this occurs, the washing machine won’t spin. To troubleshoot this fault, ensure that the machine is unplugged and disconnected from the power supply first, then open the access panel and bring out the pump. You can observe if the pump pulley has frozen by trying to rotate it.

If it won’t rotate, you’ll reed fix a new pump. The fault could also be with the belt in the pump. It could be it’s broken or as worn out. Whatever is the case, the best option is to replace it with a new one.

If the lid switch is no more working, the washer won’t spin; in fact, it won’t function at all. To locate the switch, you might need to open the top of the washing machine. With the washer plugged in but the power supply off, after accessing the switch, ON the power supply, and press down the switch. It should respond, but if it doesn’t click you’ll need to replace it with a new one. 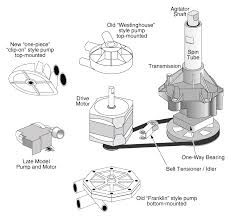 If this happens, you have no choice than to rewind the coil of the motor or replace it with a new one. To identify these Issues in the washing machine when it comes to motor problem sometimes an unusual sputtering will be observed during the washer’s operation or the might be some sparking underneath the washing machine this is a sign that the motor is going fault and might later cause the washer not to spin again.

Most manufacturers of washing machine uses a small motor coupling made of rubber and plastic. It’s always mounted to connect both the motor shaft and the transmission of the washing machine, and can be worn out or fail with time. To troubleshoot this a visual examination is the simplest and easiest way to do this. If it is observed that the motor coupler has failed or worn out, it is best to have it replaced. Yes, you can do it yourself.

Some brands of washing machines use a clutch to aid the machine to attain to the ideal spin speed. But if the clutch has worn out, the washing machine drum will have problems attaining spinning speed or won’t spin at all. When this happened, a technician needs to replace it, as the work involved is quite technical. So don’t try it yourself unless you have a measure of knowledge on how to do it.

How to fix a Washing Machine that Doesn’t Spin

To know the secrets of how to repair a washing machine that stopped spinning, you need to know how to troubleshoot the problems. Washing machines come in various brands: some have it cover lid at the top enabling loading from there, while others can be loaded from the front; still some washing machines are belt-driven, others are just direct-drive types.

In general, all washing machines have a big tub that fills with water, vibrates, and finally rotates to drain the water. However, there are many parts in the washing machine the non-expert in-home repairs may know nothing about. If you happen to be such an individual, don’t worry yourself. Here are a few things you can do if your washer goes through all the agitation cycles but then suddenly does not spin.

Step 1 – Check and Re-position how clothes were loaded.

Check to ensure that the off-balance shut-off is faulty, if it is working, the lid switch might be faulty. You may need to examine the tab on the lid that strikes the lid switch. A broken tab in the washing machine may cause it to halt during the spin cycle. But if the switch is pressed and released, the switch fails to click, it may be broken.

You could attempt to remove, test, and replace the switch only if you have much knowledge, and feel confident enough in your home repair skills. Otherwise, attempting a repair on the washing machine is voiding the machine’s warranty. For this not to happen, it is best you call a professional to save yourself time and energy.

Another common cause of washing machine not to spin is when the belt in the machine is faulty, It could be is loose, worn, or broken. If you’ve fixed such a problem before, you can try to tighten or replace the belt. But Bear in mind that to replace the belt with a new one, you have to disassemble and assemble your washing machine. So if you are not really skilled at it inviting a repairer is the best option.

If the minor thing you could fix on your own are all examined and nothing is observed. The fault may be in the electronic controls in the washing machine. It is not advisable to attempt repairs on it unless you are a certified electrical technician.

Top
Enable Notifications    Ok No thanks