Skip to content
You are here
Home > Electrical Technology > Get to know how Electricity Work in Your Home? 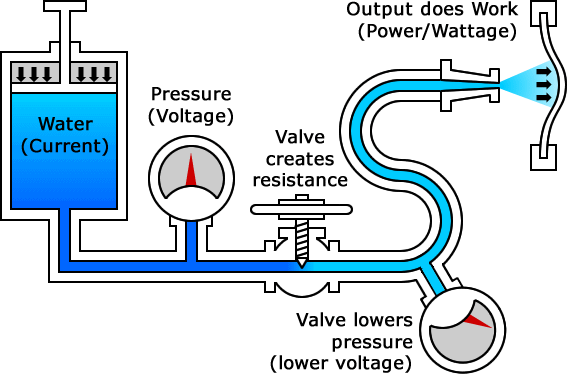 Understanding Voltage, Amperes, and Wattage and when to use them.

The Electricity system in your home, and its current flow might look quite mysterious, since this electromagnetic force is entirely invisible you only see its effect just like the wind. But it can be easier to understand if you compared it to water running through the plumbing pipes in your house. Though the analogy is not perfect, there are few similarities in how electrical systems work.

Both water and electricity enter your home using a utility service line, Or an external source and pass out after being distributed throughout the building. Water flows through plumbing pipes and is utilized at faucets and other fixtures before exiting via a drain system. Similarly, Electricity flows through a network of wired electrical cables and is used by the bulb to produce illumination, appliances, and other electrical devices use it too; and then the electricity “exits” your home by flowing back to the ground.

Water flows throughout a home’s plumbing piping because it is pressurized by the water company or by a well system (having a tank placed at a very high height). Once it is used at a point or fixture, it has no pressure again and must rely on the force of gravity to flow through the drain pipe.

Therefore, all the water leaving or exiting the building through drains can be considered to have no pressure. Likewise, the electricity that comes into your home has a specific pressure (voltage) that is regulated by the power company or supplied from an external power supply such as a generator or inverter.

This pressure causes the electrical current to flow through the electric cable leading to the house and throughout the home’s electrical system. Each electrical device or appliance use electricity to function. Anything not used flows back to the electrical service cable entry point (and finally into the power grid) via neutral circuit wires. This return is considered to be without pressure, much like water going down the drains of your home. 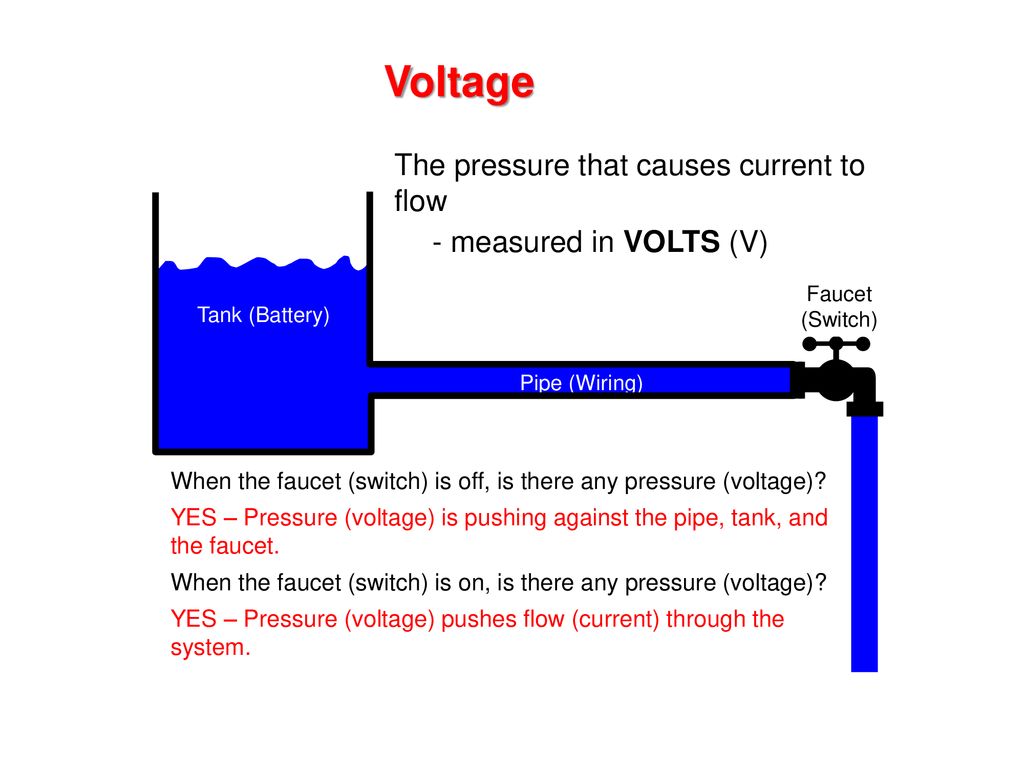 The circuit breakers in your home’s distribution board panel each control the electrical flow in a separate circuit, and each has a specific current (amperage) ratings. Most general-use circuits are rated from 5,15 or 20 amps, while large electrical appliance circuits are rated for 30, 40, 50, or more amps. When too many electrical appliances or lights are used on one circuit line, it increases the flow to the point of overload. This sometimes causes the breaker to trip and shut off the power to the circuit.

The quantity of electricity used by an electrical appliance or device drawing power from a circuit is measured in wattage (watt). Watt is a function of both voltage (pressure) and amperage (flow, or current).the product of voltage and amperage gives the watt.

For example, your microwave might be rated for a maximum of 12 amps, and it is plugged into a 240-volt outlet. The maximum power draw of this appliance therefore, is 12(amps) x 240 (volts) = 1,200 watts. That’s how much electricity the microwave oven consumes whenever it’s running on high though, other settings, like defrost, usually use lower watts.

In a similar way, you can compute the available wattage of an entire electrical circuit. A 15-amp, 240-volt household circuit has a maximum of 1,800 watts available (15 x 240). This means that all the light fixtures and plug-in appliances being used at the same time can add up to no more than 1,800 watts before the circuit line becomes overloads and trips the circuit breaker controlling that circuit.

Conserving Electricity to serve some money

Just like water, where conservation means reducing the quantity of water used or reducing the number of gallons consumed, conserving electricity is a matter of minimizing the total amount of wattage used or consumed. Going back to our plumbing comparison, an energy-efficient light bulb or electrical appliances can be likened to a low-flow showerhead.

Note; Old showerheads were made to flow about 5 gallons per minute, but the modern low-flow models use not more than 2.5 gallons per minute. Similarly, where we once routinely used 100 or 60-watt incandescent bulbs, we now use 12- or 14-watt LED bulbs. And just as water use can be reduced by fixing faucets or point that leak, electrical consumption can be reduced by switching off lights and electrical appliances when you leave a room or your home thus reducing your electricity bill and saving some money.

Conservation of electrical energy, like conservation of water, involves minimizing the quantity of electricity used, as measured in watts. This can be achieved by using more efficient light bulbs and appliances that have lower wattage needs, or by reducing the time they are drawing power (such as by not running air conditioning constantly).

19 thoughts on “Get to know how Electricity Work in Your Home?”

Top
Enable Notifications    OK No thanks